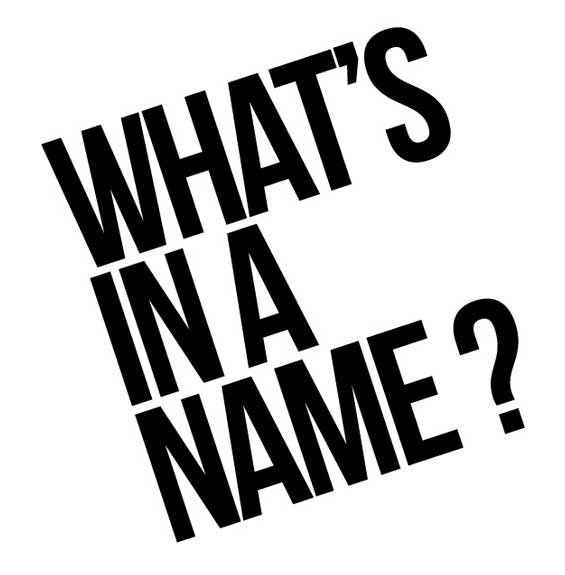 What’s in a Name?

What’s in a name?

Not much, it would seem – at least not if we follow the thoughts of Shakespeare in Romeo & Juliet, where he asks that very question:

“What’s in a name? That which we call a rose

By any other name would smell as sweet.”

It’s a nice relaxed approach to take, but it doesn’t work when you have a business in need of a good name. In my case it had to be short and punchy, memorable and easy to say. Some businesses have traded on these very elements. Apple, Google and Microsoft are three of the biggest businesses trading today, and they all trade on a single word. That word is their brand, and these brands were worth an incredible £576,144 BILLION combined in 2015 alone.

I’ve often been asked how the name Ministry of Chocolate came about, so this is an accurate account of how. I was tempted to start an urban legend that it developed after days of brainstorming whilst locked away in a romote cabin in the wilds of Scotland, but I decided to keep it simple and accurate.

The hunt for the ideal business name

As the business idea started to develop (that’s a story for another time, and one I will share), I began the search for a name that would reflect the business. It’s amazing how one, two or three words can have so much power. That’s why those words are so hard to find. Finding them wasn’t easy.

I began by using a variety of online name generators for inspiration. Some were better than others, and some used algorithms so sophisticated they created names that really shouldn’t exist at all. Yet even when I came up with some good ideas using this method, my balloon of happiness very soon deflated when I found the .co.uk and .com domain names had already been taken. Even when I got over that hurdle, I often found the Companies House website stated the name was already being used by another company.

This wasn’t going to be as easy as I had hoped. But then, perhaps finding the best business name shouldn’t be easy at all.

Was I asking too much?

I’ll reveal my basic list of requirements that I wanted to tick off for both the company name and the corresponding domain name:

Not exactly a long list. Nothing there that didn’t make sense.

Yet as I soon found out, virtually every version of the word chocolate – including all manner of misspellings is already registered including…..choclate, choccolate, chocolatee, choocolate, choocolat, chocollate and chocola (sic).

Furthermore, all the obvious names with the word chocolate included that related to a location of some kind had also been taken. So, for example, House of Chocolate and Home of Chocolate, as well as other derivatives such as Chocolate Mansion, Chocolate Castle and Chocolate Cave…are all taken.

Since misspellings weren’t going to work for a professional business, and the business wasn’t going to be based in a castle, a mansion or a cave, it was back to the drawing board.

They say the darkest moment comes just before dawn. And whilst I didn’t have a ‘Eureka!’ moment and it certainly didn’t happen in the bath, it happened while I was a passenger in a car, returning from Liverpool with a good friend of mine.

We were travelling east on the Pennine section of the M62 – the spot where the motorway splits in two with a moorland farmhouse situated between the two carriageways. For some reason, I asked if there was a Ministry of Sound in Liverpool. An odd question, eliciting mild amusement and some concern from David who was driving. But then a thought occurred “What about the Ministry of Chocolate?”.

“No chance,” came David’s reply. “It’s too good, the websites will be taken.” As much as I hated to admit it, I had to agree.

We got back to David’s house an hour later, where I’d left my car, and ran a search to see whether ministryofchocolate.com and ministryofchocolate.co.uk were available. Amazingly, they were, and within the space of ten minutes, I became the proud owner of both. I was so excited I completely forgot to check whether Ministry of Chocolate Ltd was available as a company name. All I had to do now was to complete the formality of incorporating the company and I was good to go.

The actual process of incorporating a company is easy nowadays. You can do it all online – you just fill out the forms, pay the fee and boom you’re the legal owner of the company.

Unfortunately, the communication I received from Companies House was a letter informing me my application had been rejected and that I had the option to appeal to the office of the Secretary of State. I hadn’t realised that some words and expressions cannot be used in a business name unless you have official permission. ‘Ministry’ is one of these words. The premise is that someone could assume that the name ‘Ministry of Chocolate’ is an official Government office!

Fortunately, there were forms I could complete that would allow me to appeal this decision. There are other non-governmental Ministries that have been created in the past, including Ministry of Food (Jamie Oliver). I used this as a ‘point of defence’, and thankfully, it worked. It took just one week to get a reply informing me my appeal had been successful. Companies House had been advised accordingly. I got my Certificate of Incorporation 10 days later.

The Ministry of Chocolate was now official. We were ready to take our show on the road!

So, if you have a fledgling business idea, and you’re struggling to come up with an appropriate business name, here’s my definitive guide to finding the right one:

It worked for me, even though I didn’t set off with that ‘helpful guide’ in my mind.

Incidentally, since the business got underway, I’ve been asked several times whether the Ministry of Chocolate is an official Government department. At first, I used to say “no, we’re just called that.” Now, however, I stand tall, puff out my chest and smile and say, “yes, we are.” It does give people pause for thought!

So that’s the truth of how the Ministry of Chocolate got its name. I still prefer the idea of brainstorming in a remote Scottish cabin better though…